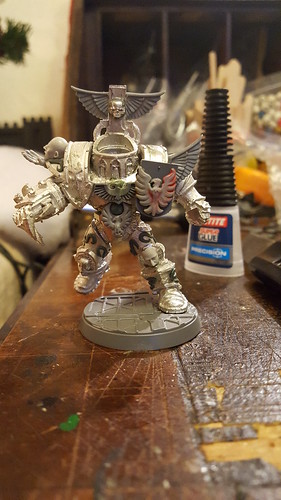 The model isn't ideal. In particular his powerclaw is on the wrong side, and his armour is bulkier than the conventional depictions. But I like him, and he's definitely coming together. Obviously there's still lots more to do. He needs a sword, a head, a stormbolter on his powerclaw, and of course a cloak... But he's getting there! I'm particularly happy with the old Empire (Freeguild?) flying eagle on his shoulder-shield. The heads on his knee and shoulder come from Historex Agents (and one of them will be the basis for his head).
Posted by Mitey Heroes at 08:31